Christmas has passed and you’ve had more than your fair share of  turkey and ham, but the silly season is far from over. With New Year's Eve (NYE)  just around the corner, things are about to get very busy. NYE presents a great opportunity to work, with thousands of people in and around the city. Navigating these crowds is the key, so we’ve made a list of all the road closures to make your night a little easier.

Sydney’s fireworks display is based around the harbour area, meaning road closures are in force on both sides of the harbour. With the Harbour Bridge closing at 11pm, it’s a good idea to be in the city before this time. Just for NYE lockouts will not apply for the CBD meaning the city should stay busy all through the night!

Melbourne’s fireworks display was designed to be viewed from any part of the city. However, this doesn’t mean the CBD will be quiet, with heavily crowded areas expected around Princes Bridge, Southbank and Flinders Street Station. 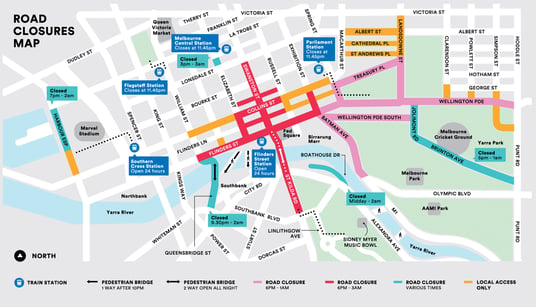 Adelaide fireworks display is into three separate locations, City of Adelaide fireworks at Elder Park, New Year's Eve at the Bay, Glenelg and Brighton Foreshore and Semaphore Beach Fireworks, Port Adelaide. Each area provides live entertainment and food and drinks, meaning they will all be busy by the time the clock strikes midnight.

We're helping to flatten the curve